Pardons Canada – Who can grant or issue a pardon/record suspension? 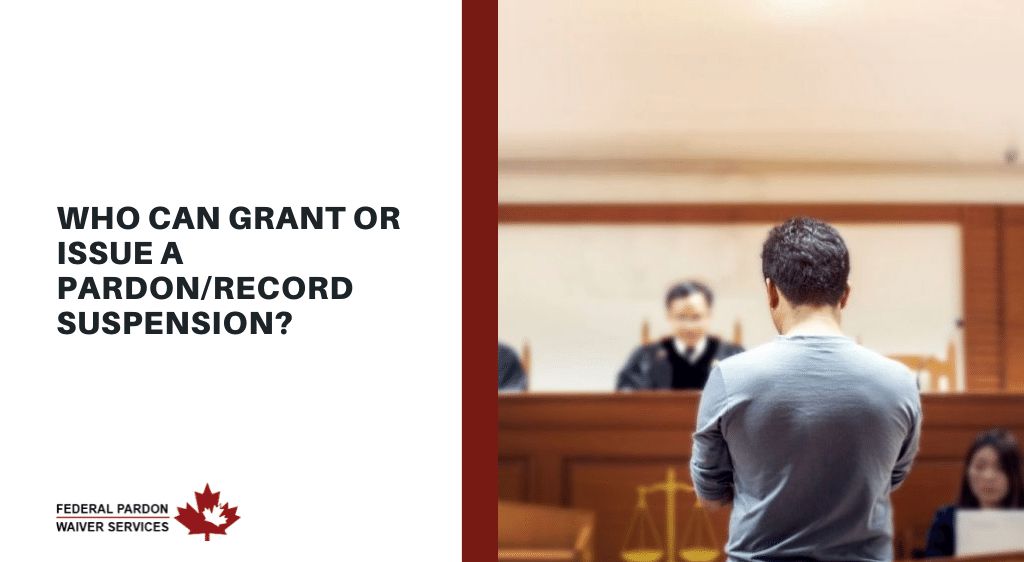 When you have a criminal record you are prevented from doing a number of things. Crossing borders, renting a home, or getting a good job are just some of the things that are made difficult by having a criminal record.

We know that sometimes, good people make bad decisions. When you want to leave behind past mistakes and move on with your life, a pardon is the best solution. A pardon is when the government forgives a person of past convictions, thus removing any remaining penalties or punishments and preventing any new prosecution of the person for the crime which was pardoned. In short, your past crimes are exonerated and will no longer affect your life.

The process for a pardon can be confusing, but who exactly issues pardons?

Pardons work differently in each country, with different bodies within their governments being the issuer of pardons.

In the US, the President is the issuer of pardons for any federal laws, and they are allowed to pardon whomever they deem fit, except in cases of impeachment. Governors of most of the 50 stats also have the power to grant pardons for any state laws. In other states, it is decided by an appointed agency or board, or the board and the governor come together to decide.

In the United Kingdom, the record suspension process is known as the royal prerogative of mercy. The issuer of pardons was traditionally the monarch, judiciary and the sovereign’s ministers, but is now solely left up to the government.

The government only grants pardons to those who are considered “morally” innocent of the offence, not to those who may have been wrongly convicted. Because of this, the use of royal prerogative of mercy is a rare occurrence.

In Canada, the issuer of pardons is a federal agency,  the Parole Board of Canada. The law that governs pardons is known as the Criminal Records Act which, as stated above, provides a person who has prior convictions to be relieved of them.

The RCMP then removes all information about the conviction from the Canadian Police Information Centre and cannot give out the information unless given approval from the Minister of Public Safety Canada.

The pardon doesn’t totally erase convictions, instead, it keeps the record of a conviction separate from other criminal records, this allows citizens opportunities like applying for jobs and apartments without being hindered by their criminal record.

At Pardons Canada, we understand the process of getting a pardon can be complex. We will walk you through applying for a pardon so you can move on with your life. By acquiring a Canadian pardon, you can ensure that a past conviction won’t appear on your criminal record.  Contact us today to get in touch with our team of professionals that have years of experience in court processes. Contact Federal Pardon Waiver Services at 1 (800) 543-2137 today!