The Difference Between a Record Suspension and a File Destruction 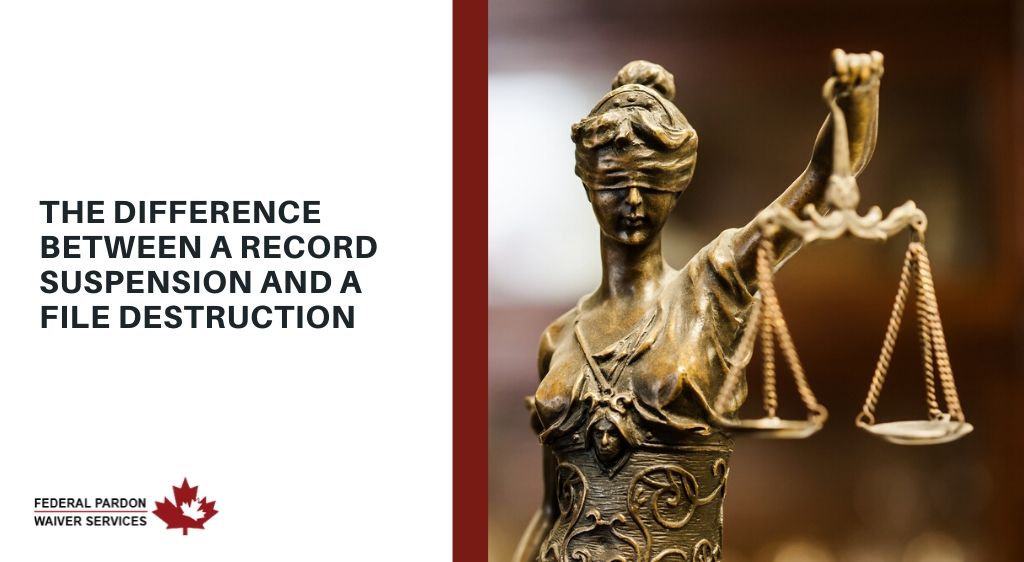 If you are looking to conceal your records so you can live without your criminal record stopping you from finding employment, finding a job, or if you just want peace of mind, there are a few routes that you can take.

Mainly, there is file destruction and record suspension. Some may confuse the two as being the same, but they are rather different. File destruction is for those who weren’t convicted and ensures that any police records such as photos, court records or any other information that was involved in a police investigation are permanently destroyed. A record suspension is for those who were convicted and is used to remove the record of a specific crime from someone’s criminal record checks.

There are more differentiating details that separate the two that should be understood, especially to someone with a criminal record, convicted or not.

A record suspension will remove someone’s criminal record from the Canadian Police Information Centre (CPIC) database, so when they try to gain meaningful employment, get an apartment, or travel, the conviction will not show up on their record. This enables people who have been convicted of crimes to live their lives without being constrained by their criminal record.

To be eligible for a record suspension you have to have finished your sentence entirely, which includes serving your time in jail, paying your fines, or any other court-mandated obligations you had to fulfill. There is also a waiting period attached to record suspensions. You can only apply for a pardon 5 years after your sentence is complete if you were convicted of a summary offence and 10 years if you were convicted of an indictable offence.

In cases when someone is granted conditional or absolute discharge, or they weren’t found guilty, they cannot apply for a pardon. This is because you must have been convicted to apply for a pardon, so instead, you must request file destruction.

There are some factors that come into play when determining someone’s eligibility for file destruction such as how the case ended, how they interacted with the police, if the charge was serious or violent, among others. File destruction can take anywhere from six to sixteen months to complete.

While both file destruction and record suspension will conceal information so those who have been arrested can live a better life, they have a fundamental difference. If you have not been convicted, you need to apply for file destruction to have your information removed from the CPIC database. If you were convicted you need to apply for a record suspension. However, all of the information will remain on the CPIC database but will be concealed from criminal record checks.

Getting a pardon will remove a conviction from your criminal record and allow you to live your life without restrictions.

If you already have a criminal record and it is affecting your day to day life; a pardon is the best solution. Contact Pardon Canada at 1 (800) 543-2137 for professional assistance and expert advice.