Pardons Canada – What is an Indictment Offence? 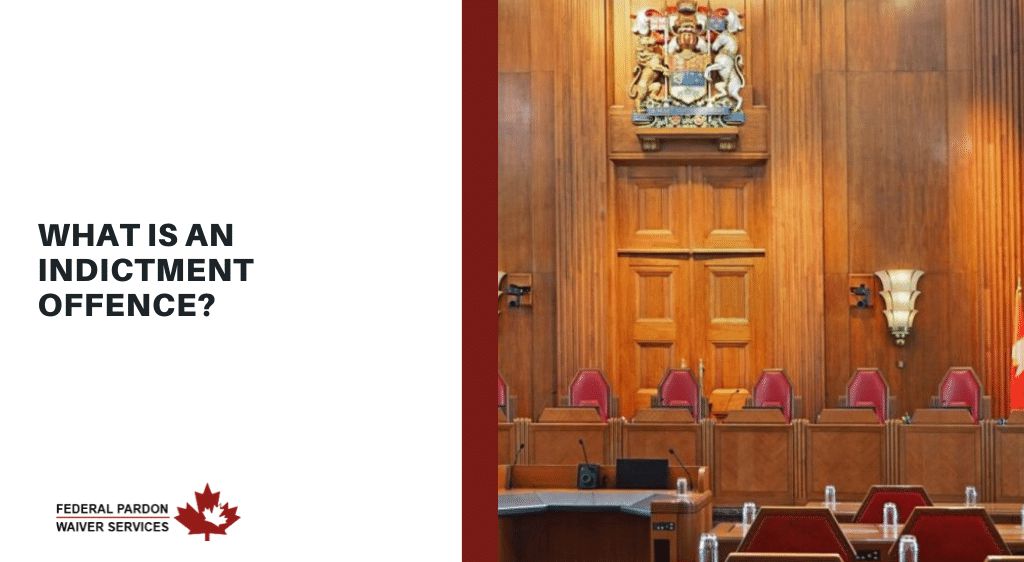 Indictable offences generally have no minimum penalty and can carry life in prison sentences with no chance of parole for 25 years.

Those charged with indictment offence have the right to how they will be tried:

However, with some offences, the Ontario Court of Justice has “absolute jurisdiction,” for example, the Crown must give consent for first-degree murder cases to be heard by the judge alone.

Unlike some charges, indictment offences have no limitation period to when the accused is charged, tried, acquitted or convicted. Aside from the charge of treason, you can have an indictable offence charged laid against you anytime after the offence has occurred.

When are Indictment Offences Ineligible for Pardon

Due to the severity of indictment offences, there are some offences that can not be pardoned or suspended from a person’s record, even after the individual has served their time in jail.

For example, Any assault or intention to commit an indictable offence against a child is not eligible to be pardoned.

Also, If you have been prosecuted more than three times for an indictable offence, with prison sentences of two years or more, you are ineligible of a pardon/record suspension.

In 2010 an enactment was added to the Criminal Records Act that added more crimes prohibited from being pardoned, for a list visit the government of Canada’s website.

When are Indictment Offences Eligible for Pardon

Of course, there are more things that factor into indictment charges being eligible for pardon aside from time. You would have to speak to a pardon service, describe your crime and situation, and they will determine whether you’re eligible or not.

If you have an indictment conviction that is effecting your life, with things such as job and apartment hunting or travelling and would like to get your life back on track, Pardons Canada has years of experience in getting Canadians pardons. Our team of professionals can help you through the pardon application process and help you move on with your life. Call 1 (800) 543-2137 today for professional assistance with Canadian federal pardons and waivers.