Pardons Canada: Getting a Pardon for Car Theft 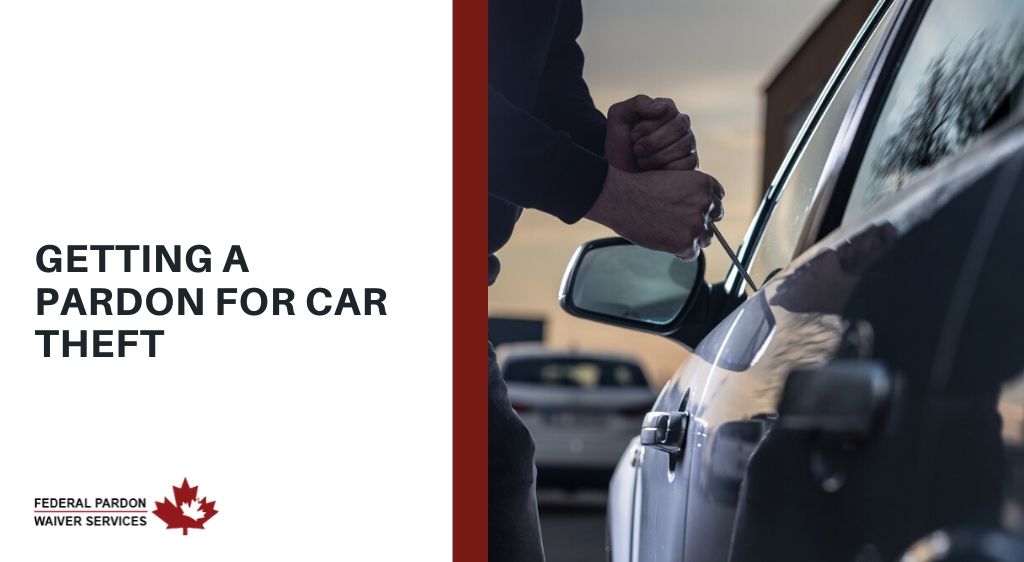 Because theft is considered a crime of moral turpitude, having a theft charge on your criminal record could lead to you being denied entry at the United States border and you will be required to obtain a US Entry Waiver to be readmitted.

If you are charged with theft of a vehicle, however, the process works a little differently. Through this article, we are going to touch on the consequences of vehicle theft and the process it takes to get a pardon for vehicle theft.

Most theft charges are broken up into two categories, theft over $5,000 and theft under $5,000. Theft under $5,000 is considered a summary offence and theft over $5,000 is considered an indictment offence – summary offences having less severe consequences and indictment offences having more severe consequences. However, there are other types of theft and theft-related offences such as possession of stolen property, theft of telecommunications, and the subject of this article, theft of a vehicle.

When you are charged with vehicle theft in Canada, it is similar to theft over $5,000 and carries similar penalties. This means that if someone was caught stealing a vehicle they would be charged with an indictable offence and could face prison time. However, when someone steals a car, the vehicle does not require a valuation to decide if the vehicle is over or under $5,000. Vehicle theft contrasts with joyriding, with the arresting officer at the scene deciding whether to lay a joyriding charge or a theft of $5,000 charge based on the scenario.

If the charge was considered joyriding, the driver of the vehicle would face a summary offence. Joyriding consists of someone taking a vehicle with the intention of driving, using or operating it but then return it to the owner. Joyriding also applies to someone unlawfully gaining entry into a vehicle but not driving it.

Gaining a Pardon for Vehicle Theft in Canada

If you have been charged with vehicle theft in Canada, the process for obtaining a pardon to have it removed would work the same as it would for any indictable offence. You will have to wait a total of 10 years after completing your conviction, including paying any fines, serving a sentence in jail, or any other court-mandated task you have been assigned before applying for a pardon.

If you were caught trying to steal a vehicle, you could end up with either a summary or an indictable offence. Either way, you will have a blemish on your criminal record that will make day to day life harder than it should be. One mistake shouldn’t be the end of your life, get a pardon and move on with your life.

If you have an indictment or summary conviction that is affecting your life, with things such as job and apartment hunting or travelling and would like to get your life back on track, Pardons Canada has years of experience in getting Canadians pardons. Our team of professionals can help you through the pardon application process and help you move on with your life. Call 1 (800) 543-2137 today for professional assistance with Canadian federal pardons and waivers.