Pardons Canada – What Is A Summary Offence? 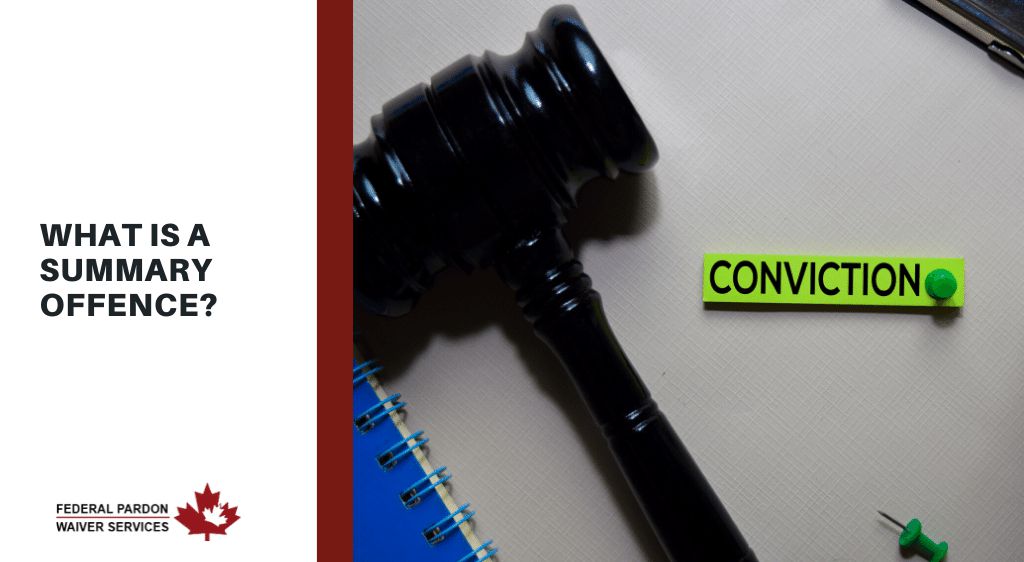 Under the Criminal Code of Canada, offences are separated into three categories, indictable, summary and hybrid convictions. Indictable offences are for the most serious of offences, things such as murder or terrorism.

In this article, we are going to cover summary conviction offences.

A summary offence in Canada is also known as a summary conviction offence, or colloquially,  a petty crime. They are categorized as the least serious offences under the Criminal Code of Canada and are punishable by shorter prison sentences, probation and/or prohibition orders as well as smaller fines. Usually, when you are convicted of summary offences you are not arrested, instead, you are given the notice to appear in court. You must be charged within six months of the offences or you cannot be charged with a summary conviction offence.

Driving With More Than 80 MGS of Alcohol

Possession of a Narcotic

There are some aspects to summary conviction offences that don’t apply to indictable offences.

Unlike indictment convictions, if you are convicted of a summary offence you are not required to submit your fingerprints to the police after being arrested. Also, summary conviction offences are appealed in the Superior Court of the relevant jurisdiction, as opposed to being appealed directly to the Court of Appeal. Someone with a trial for a summary conviction is not entitled to a jury or have their case heard in the Superior Court of Justice unless it also involves an indictable offence at the same time.

When are you Eligible for a Pardon Involving a Summary Offence?

A person is eligible for a record suspension or pardon for a summary offence 5 years from when the complete sentence was given by the court judge; given that they have not been convicted of any further offences during this period of time. A sentence may include fines paid, victim surcharges, restitution, and/or compensation orders.

If you have a summary conviction that is effecting your life, with things such as job and apartment hunting or travelling and would like to get your life back, Pardons Canada has years of experience in getting Canadians pardons. Our team of professionals can help you through the pardon application process and help you move on with your life. Call 1 (800) 543-2137 today for professional assistance with Canadian federal pardons and waivers.