Pardons Canada: Travelling to the USA and DUI Pardons 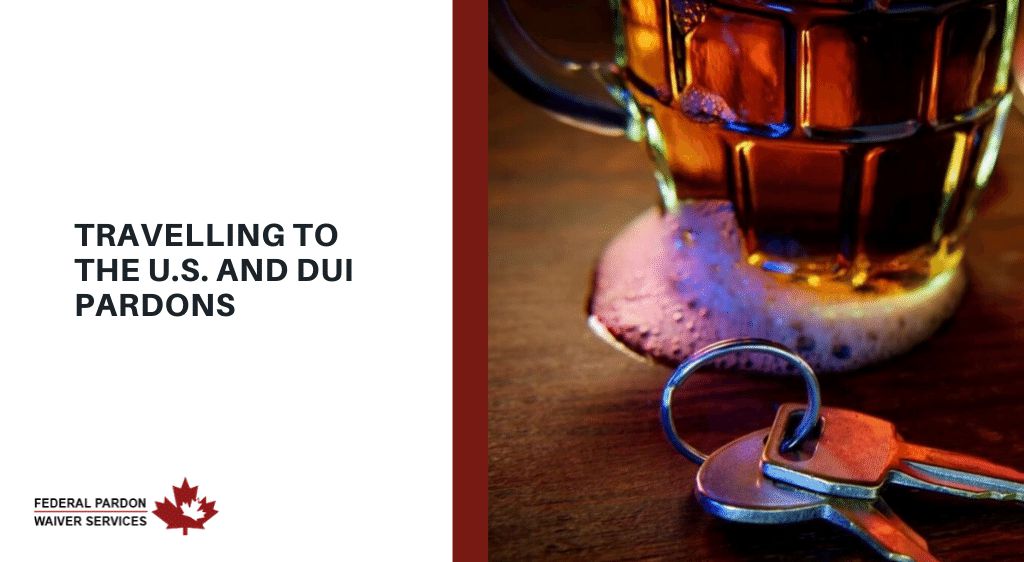 When entering the United States, either by car or plane, one of the first things you will need to deal with is the Customs & Border Protection of the United States (CBP). The job of the CBP is to keep out illegal materials, as well as people that could pose a threat.

Officers monitoring the border will ask for your passport and ask a few routine questions before letting you through. However, sometimes officers will do random criminal record checks to see if you have any prior convictions. If you do have a criminal record, you could be stopped from entering if you have serious charges, but if your charges are less severe it will be more likely that you will be let through.


Crossing the Border with a DUI

When you do have a criminal record and try to cross into the US, there is always a chance you will be denied access. Each charge will be looked at differently when the CPB is determining if you’re fit to enter the country. So, what if you’re looking to enter the US with driving under the influence, (DUI) or impaired driving charge?

A DUI charge is given after one operates a vehicle with 80mg of alcohol per 100 ml of blood in their bloodstream. In some cases, if you have less than 80mg and were driving dangerously, you could still be charged.

If you attempt to enter the US with an impaired driving charge, with no other serious criminal charges to your name, you will more than likely be allowed through. This is because a DUI is not seen as serious as other charges by the CPB.

Crossing the Border with Multiple DUI

Though having a single impaired driving charge is seen as minor and wouldn’t cause too much trouble while crossing the border, however, having multiple DUIs is a different story and you may not be able to enter into the US.

If you do have more than one DUI charges or cannot enter the US of other reasons regarding your criminal record, there is a solution.

For those with multiple impaired driving charges or other charges that prohibit them from entering the States, there is always the option of a US entry waiver.

A US entry waiver is a document issued by the Department of Homeland Security (DHS) that allows Canadians with prior convictions to be permitted to enter the country.

If you have already been denied access to the US, you must obtain an entry waiver or risk being detained by US authorities.

It is important to understand the difference between an entry waiver and pardon when trying to enter the US.

If you have previously been granted a pardon and attempt to enter the US, you will still not be guaranteed entry. This is because pardons prevent convictions from appearing on an individual’s record, but the conviction will still appear on the CBP’s database.


Applying for an Entry Waiver

The easiest solution to crossing the border is to get an entry waiver. However, the process for applying is anything but simple and requires a range of steps.

On top of the application form, you will also need:

Once the document is issued you may use it to cross the border. The document tells officials that although you have a conviction on your record, you have been screened by the DHS and have been allowed access to the US.

The process can be quite onerous and take some time, especially if you miss a component of the application. This is why many seek assistance when applying for a US entry waiver.

If you’re looking for professional help to guide you through the US entry waiver, Pardons and Waivers Canada has years of experience securing US entry waivers and DUI Pardons. We have helped many Canadians with criminal records travel to the US without any trouble.

Contact Pardons and Waivers Canada today at 1-800-543-2137, to talk with one of our representatives about applying for a pardon or entry waivers.