What are Dropped and Dismissed Charges? 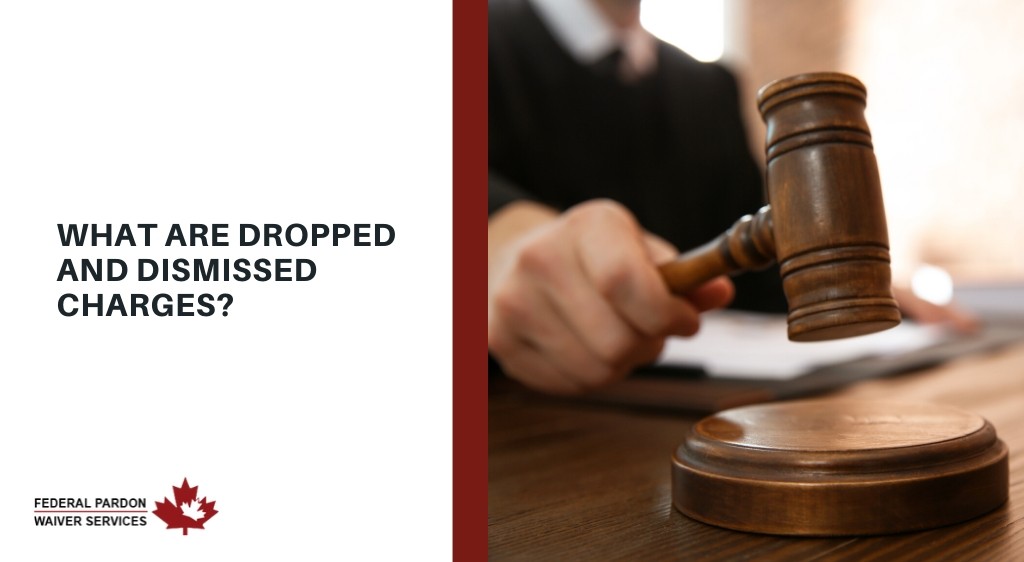 Once you find yourself within the legal realm, you are sure to be bombarded with terms and phrases that you have either never heard before or simply don’t know what they mean – and that’s ok. You can be forgiven for not knowing what words like ‘demurrer’, ‘malfeasance’ and ‘adjective law’ mean. This is why we have legal experts in the world because no one expects you to define ‘punitive damages’ at a dinner party.

Naturally, the world of pardons Canada has its fair share of head-scratching words. This means that if you ever find yourself looking to acquire a pardons or US Entry Waiver, you’ll need to brush up on your legal terms.

The process of getting a Canadian pardon is long and complex, which makes it easy for someone to get confused at any point. But not to worry. We are here to help ensure that the abundance of legal terms thrown at you don’t make your head spin out of control. There are many legal terms out there that are relevant to the pardons process, but today we are going to focus on two of them: Dropped charges and dismissed charges.

But first, a refresher on our services

If you are landing on this site for the first time, then that could potentially mean that you are new to the world of record suspensions. So before we jump into dropped and dismissed charges, let’s take a quick look at our core services:

This is also known as a record suspension, and it allows for the removal of a Canadian’s criminal record from public view. That means if someone runs a criminal background check on you, they will not find any past convictions. This obviously is a tremendous benefit for people with past convictions trying to apply for jobs or get custody of their children.

US Entry Waiver is essential for any Canadian with a criminal record who plans on traveling to the US. Once you get to the border, you can be denied entry if border agents see convictions on your record (particularly pot possession convictions). An Entry Waiver allows you to travel to the US because it is a document that informs border agents you have been properly vetted and that you don’t pose a threat to public safety.

During a criminal proceeding, charges against an individual are filed. This happens after a person is arrested and a prosecutor believes there is enough information to indict. However, the prosecutor can get to a point where they don’t think they have sufficient evidence to persuade a judge and/or jury that a person is guilty of the original charges. Additionally, it’s possible that the charges are simply not filed.

If either of these events occur, the prosecutor can decide not to move forward with a case and just drop the charges.

The path towards dismissed charges is very similar to the path to dropped charges. Additionally, this outcome is similar to having charges dropped. When a case is dismissed, this means that a judge decided not to allow the case to proceed after charges are filed. A judge would make this decision in the event that they decided there was not enough evidence to proceed with a fair trial.

How Does This Impact You?

This is an important question, because if dismissed charged and dropped charges had no bearing on the record suspension process, then we simply would not be talking about it. You may be a bit confused at this point because you’re thinking, “Well, hang on, if my charge was dropped or dismissed, then I have nothing to worry about.”

The problem is that there are records of the charges and everything that goes with that (reports filed, fingerprinting, etc.). These are the things that can come back to haunt you later in life. A pardons Canada or US Entry Waiver ensures that you don’t have to deal with any inconvenient obstacles.

Getting a Pardon for Dropped or Dismissed Charges

If you have ever been arrested and charged with a crime, but that charge was either dismissed or dropped, you can apply for a pardon. This will remove any information about the charge from your record.

However, just because you have had a charge dropped or dismissed, this does not mean you can immediately apply for a pardon. Depending on the outcome of a charge, your eligibility for a pardon will change. This means that you will have to wait a certain amount of time before you can submit a pardon application.

Luckily, for both dropped charges and dismissed charges, an individual will only have to wait 5 months before they can apply. This starts on the date that charges were either dropped or dismissed.

There really is so much to this process. That is why we always make ourselves available to our clients to ensure that they are sufficiently informed about everything related to pardons Canada. If you have questions for us to help clarify things for you or you wish to work on your pardons Canada application, then we encourage you to contact us today.